Denis & Dorothea Butt spent many happy years of their early married life in Uganda where their three children, Adrian, Helen & Martyn, were born. Denis worked as a Researcher in Crop Disease at the Kwanda Research Station and his specialist interest in coffee took him to the Mount Elgon area. They returned to England in 1966 but never lost their love of Africa.
Dorothea was a professional singer and after her death in August 2002, Denis arranged musical concerts in her memory to raise money for disadvantaged children in Uganda. Denis was always passionate about children’s education and so the donations sent to Uganda Women Concern Ministry were used to provide academic or skills-based training to many AIDS orphans who would otherwise have had no hope of an education and a tough future.
Over the years, Denis continued to support UWCM through Uganda Concern UK but sadly, he died on 26th January 2019 (his 85th birthday). However, Denis had not forgotten his links with Uganda and the family informed us that he had left a generous gift in his will to UCUK. In keeping with Denis’s belief in the importance of education, his legacy is currently being used to fund the senior school fees of several orphaned teenagers who have no other family support.
Denis & Dorothea’s daughter, Helen, discussed the possibility of something in memory of her parents and during our visit to Uganda in January 2020, close to the first anniversary of Denis’s death, two Jacaranda saplings were planted in the grounds of UWCM’s offices. Helen had donated a beautiful plaque which was placed alongside the trees after a special time of prayer & reflection. Mabel, one of Denis’s beneficiaries from the early 2000’s, was able to attend and plant one of the trees. She testified to the great impact the Butt’s donations had made to her life and how it enabled her to go to university and qualify as an engineer! 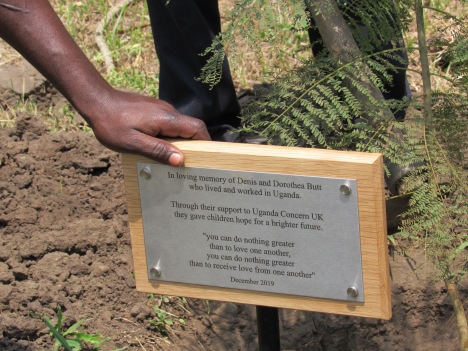