Although the charity Uganda Concern UK was officially formed in 2009, the Trustees have been supporting the work of Uganda Women Concern Ministry (UWCM) since 1995 when two of the trustees – Bridget Withell and Terry Game – visited Uganda as part of a team of volunteers with Tearfund. They were taken to visit several projects throughout Uganda supported by Tearfund but it was the 2 days that they spent with UWCM that had the greatest impact on their lives.

They witnessed lives being completely transformed by the staff and volunteers who demonstrated God’s love by bringing practical support alongside spiritual hope to those in desperate need, especially families affected by AIDS. AIDS was greatly feared at that time due to its devastating and usually fatal outcome because no treatments were available. Bridget and Terry both returned to the UK determined to do whatever they could within their local churches and communities to raise funding and awareness of the holistic work being carried out by UWCM.

Since that time Bridget and Terry, together with their husbands Steve and Terry, plus close family members and friends, have visited Uganda on many occasions and their relationship with the staff of UWCM has grown and developed.

In February 2017, we were delighted when Keith Ketchum agreed to become a Trustee of Uganda Concern UK. Keith works for Mission Aviation Fellowship (MAF) and brings with him a wealth of knowledge and experience of overseas work and mission. Keith visited UWCM in 2013 and is passionate about their work. 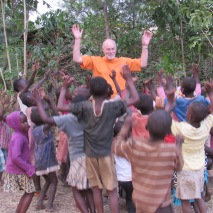 In 2016, UWCM celebrated 25 years of ministry! Founded by Edith Wakumire in 1991, their work has grown and developed over the years and there are currently 9 members of staff who work tirelessly to serve the most vulnerable within their society.   Each time we visit, we never fail to be amazed, humbled, challenged and inspired by the staff – and by the teams of volunteers trained and supported by UWCM – and come home determined to do all we can to support their ministry.  See www.ugandaconcern.com for more information.